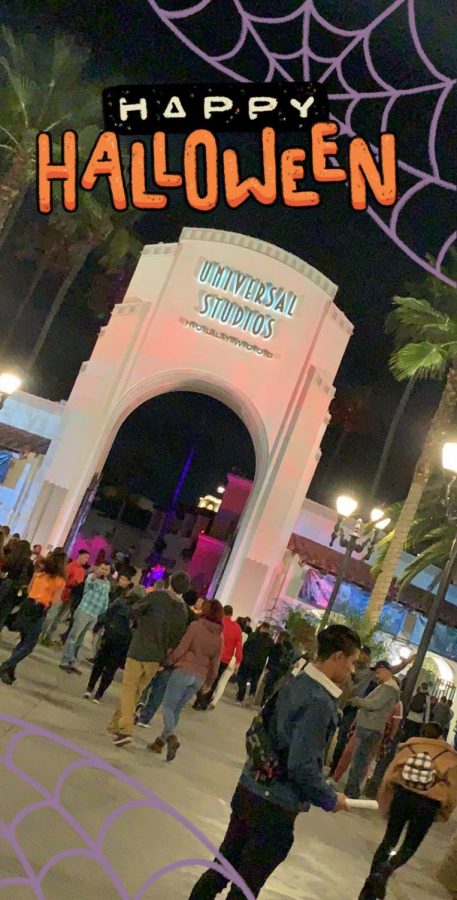 The entrance gates to 2018 Halloween Horror Nights at Universal Studios.

Horror Nights is an event that takes place at Universal Studios Hollywood. It lasts from September through the end of October, and is typically open Thursday to Sunday. During these days the park closes earlier than usual to start preparing for the special night-time event. Guests arrive around 7 p.m. and the event ends at 2 a.m.

Once you have entered the gates of Horror Nights, you are greeted by scary characters who are possibly your worst nightmares. You can usually see clowns with chainsaws and monsters with knives and other dangerous weapons. Even though they are actors and actresses and the weapons are props, the effect of it gets you scared. They approach you and corner you until you scream and run away. It is truly horrific, but very fun to experience.

Once past the first part, you are given the options to sit on the rides or go to the haunted mazes. Each maze has a different theme. For example, this year they had mazes from several movies such as Trick ‘r Treat, The First Purge, Poltergeist and Stranger Things. The mazes were decorated with items from each movie or TV show and included the actors or main characters. As you went through a maze you were always on your toes, because you never knew what would pop out and scare you or what would be waiting for you behind the curtains. The mazes were typically five to seven minutes long and were a walk through, where you started from the entrance and tried to make your way out.

Throughout the park there were different attractions you cold attend to and different areas where you could go to get scared throughout the park. One of the attractions was the Toxic Tunel, a long tunnel which you had to go through to get to the other side of the park. But during the walk through, you were constantly being scared by the characters. You also had flashing lights and loud music, making it very difficult to get through.

The overall experience of this year’s Halloween Horror Nights was one of the best I’ve ever had, from the scare zones to the mazes. It is a great experience and a tradition I will continue to do every year. If you are brave enough to go, it is an experience you’ll never forget.